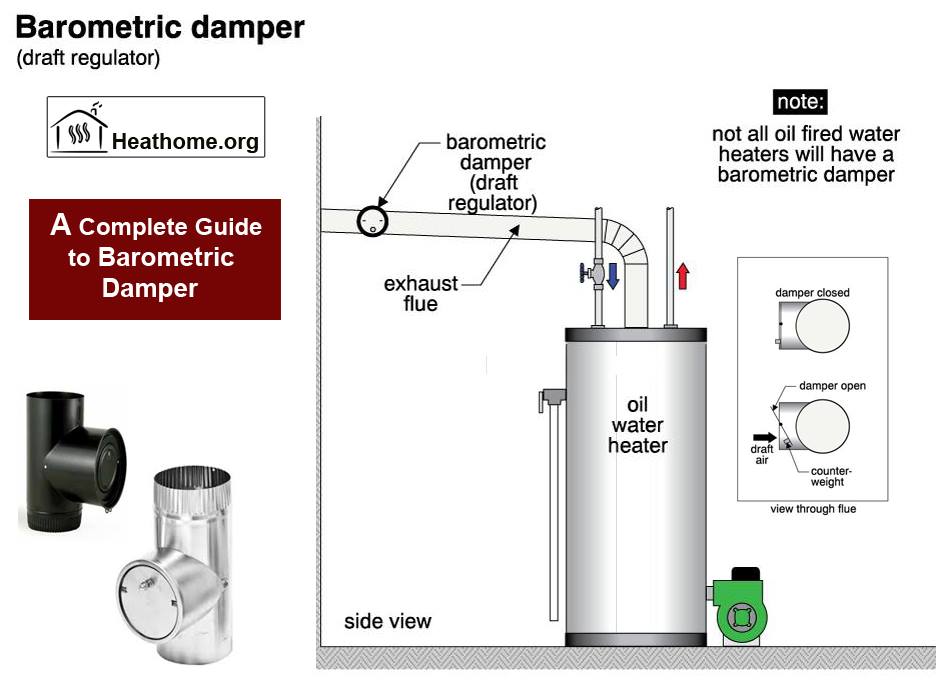 To put it simply, barometric dampers are helpful for controlling the draft in your boiler. You can mostly find it in the boilers that have a category I vent. To understand everything more clearly, you will have to find out about stuff like a draft in detail. In this article, we will be breaking down every single aspect of a barometric damper and we’ll also give you a clear explanation of why it is useful.

What does a barometric damper do?

We’ve discussed earlier that a barometric damper helps control the draft in your boiler, well, what is a draft?

Hot air is a lot less dense compared to cold air and it also weighs lesser than the latter. This is one of the reasons hot air balloons rise above the ground. Let’s apply the same thing to the chimney and the boiler inside.

We’ve got a simple answer for what a draft regulator or barometric damper does. It basically controls the push of air from the boiler into the stack.

What is a barometric damper?

A fireplace is one of the most important things that keep you from freezing and turning into a big stone of ice (we’ll that’s a joke). In an extremely cold winter, nothing could be worse than a damaged fireplace.

A fireplace is mainly needed to heat up a room and as heat rises, you will need a chimney for the purpose of ventilation. If there is no proper ventilation, it can turn out to be a great risk for the user. And your chimney carries a certain mechanism to help provide enough ventilation. This is when a barometric damper comes into play.

What is a barometric damper used for?

To put all of the miscellaneous stuff we’ve talked about into place, let’s discuss why a barometric damper is important and why you should use it?

As we know by now that a barometric damper is used to control the draft in your boiler, so you may ask, why do I need to control the draft? When there is too much draft inside your boiler, it drastically decreases the efficiency of your fireplace which in turn increases the cost of using it. Along with that, an excessive draft is dangerous and can raise the temperature of your chimney above normal.

On the flip side of the case, a very little draft is also dangerous and can result in the production of carbon monoxide in the worst cases. Your chimney draft varies tremendously and it can turn out to be extremely dangerous if it raises or decreases a little. So, in the search to find a way to stabilize the chimney draft, barometric dampers came into existence.

When we talk about the single-acting barometric damper, the main differentiation is it only allows your damper to be able to swing in one particular direction. In case there is pressure inside the stack, the single-acting damper closes.

A double-acting barometric damper swings both ways. It also allows the spillage of flue gases when there’s a blockage of the flue which sounds kinda crazy. This is the reason you have spill switches on barometric dampers. In case there is spillage from the damper into the boiler room, the spill switch senses it and turns the burner down.

Jane Foster is the Editor In Chief at Heat Home, which helps people to make good choices for investing in new appliances.